INSOLVENCY BY THE NUMBERS

Following are some of the latest statistics on insolvencies in Canada.

During the economic recession and its immediate aftermath, insolvency volumes reached record highs. Volumes in 2012 and 2013 reflect a return to relative stability. 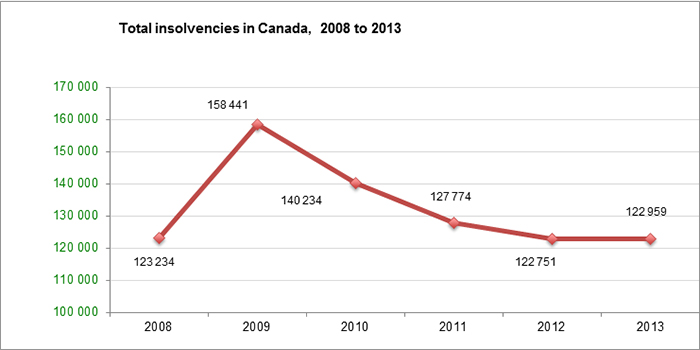 The x-axis shows the year for the data points, starting at 2008 and continuing for each year until 2013.

CONSUMER PROPOSALS AS A PROPORTION OF INSOLVENCIES CONTINUE TO GROW

There were a total of 118,678 consumer insolvencies in 2013, which accounted for 96.5 percent of all insolvencies for the year.

In Ontario, proposals represented approximately 51 percent of all consumer insolvencies filed in 2013, a proportion that has been stable for the last three years. In other provinces, the proportion of proposals grew over this same period and currently ranges from 9 percent in Newfoundland and Labrador to 43 percent in Alberta.

The x-axis shows the year for the data points, starting at 2008 and continuing for each year until 2012.